Branded companies are looking beyond traditional methods in marketing to make sure their products are clearly and quickly understood and have maximum stand-out in a crowded marketplace.  The CEO of Sign Salad, Dr. Alex Gordon, has helped companies conduct such ‘semiotic’ analyses across four continents and in a number of different sectors and conducted a masterclass at a recent British Brand Group event held in collaboration with the Museum of Brands, London.

How brand thinking is changing

“The world’s most successful brands, those that have either retained or gained market share and leading status in their category, have done so because they are culturally relevant,” says Dr. Gordon.   “Those brands which are losing market share are those which have lost their cultural relevance.”  Semiotics is a way of understanding the cultural context in which your brand operates and ensuring it communicates its values clearly, relevantly, confidently and influentially.

Brands do not exist in a vacuum but are inseparable from the culture that surrounds them. There is often a gap between the brand owner’s intention and consumers’ reception of a brand’s cultural meaning and messaging. Shedding light on how consumers actually perceive the messages that are being communicated – based on cultural signals, product category, and competitor comparisons – can help brand owners adapt their packaging and messaging and better control that meaning to make it more relevant and powerful.

Everyone engages in semiotics unconsciously

Consumers make cultural connections with brands “instinctively, instantaneously, irresistibly and unconsciously,” says Alex.  For example, the packaging of a tea brand typically raises instant connections in a consumer’s mind with refreshment, hydration, healthiness, happiness, Yorkshire-ness (in the UK) or Southern-ness (for iced tea in the US).  Other elements of the packaging, for example the wrong type of glass or an unlikely or even dangerous pouring angle shown in the packaging graphics, might send negative or confusing messages about the product’s likelihood to produce happiness or healthiness.

“If we can unpack and bring these signs to the surface, we can begin to understand whether they are communicating relevantly or not, whether a brand is or is not in control of its meaning and whether indeed it is likely to be relevant to us as human beings, individuals and consumers”, says Alex.

The ever-changing environment of residual, present and emerging cultural values

Cultural values change over time and if one looks at a supermarket shelf one can see some brands that evoke residual but fading signs of the past, some that reflect the dominant cultural codes of the present, and those that provide signposts to potential emergent cultural values of the future – often openly and deliberately contradicting current perceptions and values.

Cola beverages are a good example of the cultural shifts that brands face and the ways in which they are responding.  The past or residual cultural messaging of popular 1950s cola drinks from America emphasised optimism, progress, American life values, freedom, even Christmas-ness.  As the present values of healthiness and well-being became ascendant cultural values and sugar-based cola drinks were seen as contradictory to those values, diet cola packaging started to proclaim in bold capital letters messages such as ZERO SUGAR.

Naturalness, authenticity, handmade artisan craftsmanship and non-exploitation are emerging cultural values that are now beginning to be reflected in cola packaging and advertising, where the font size of ZERO SUGAR has shrunk considerably and instead, the larger, bold face names of fruit appear topmost on some cola packaging now along with a hand-drawn, woodcut of a particular fruit. 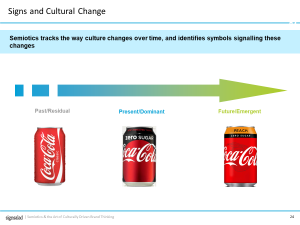 Similar shifts are happening with bottled water.  Once upon a time, everyone drank commodity tap water without a second thought, but in the late 20th century the cultural values shifted to thinking that tap water contained unnecessary chemicals and was unhealthy.  So branding that made bottled mineral water products look Alpine fresh or fiery-volcano pure appealed to our deep cultural values of naturalness and healthiness.

The current cultural shift is toward values of environmental protection, sustainability and responsibility, potentially hurting the appeal of bottled water.  One option is of course unbranded – tap water or public water fountains.  But one new company (Fred Water) has produced a hip-flask-shaped recyclable glass bottle with or without spring water inside, very much capitalising on the emerging values in this area.

Alex gave several further examples of how brand communication has needed to shift over time when cultural values have changed, or when semiotics has uncovered messaging that was unintentionally contradictory with the prevailing culture’s (and indeed the brand’s) values.  These included: 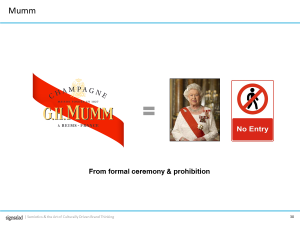 Culturally relevant branding is the wave of the future

“Thinking about branding semiotically can alter the ways in which people engage with brands and how they understand their meaning,” says Alex.  “That is why brand owners are beginning to pay more attention to culture and place it closer to the heart of their approach – not only in helping to understand consumer-driven brand thinking but to enhance the cultural meaning of their brands.”

“This delivers shareholder value and mitigates the risks of commodification, allowing brands to fulfil their role as culturally relevant objects. This is how they can engage with us in the most meaningful and powerful way.”